In August of 1994, the group collectively decided to function independently from the St James Temple in order to facilitate activities and participate in events from other Hindu organisations. It was thought that this move would be more inclusive and accommodating to Hindu youths in Port of Spain environment and would also increase the range of experiences within the group and allow exposure to different aspects of Hindu experiences. As a result of this, the group relocated to 9, Cipriani Boulevard, Port of Spain and all meetings and practice sessions were scheduled at the homes of the group members.

The purpose of the Youth Group was to provide an environment and opportunity which would enable young Hindus to develop into stable, cultured and god conscious individuals continually following the Hindu way of life as engaged participators and not as spectators.

The activities constituted learning to sing, playing musical instruments, learning the religious texts such as Ramayan and Bhagavad Gita, visiting places interest in the country, organising various outdoor activities and taking part in as many festivals as possible. It also allowed the members of the group to increase in personal skills such as managing events, time management, organising projects and handling fundraising events.

During the time of activity, the group participated in a number of activities and religious occasions. Foremost among these was the annual festival of Phagwa or Holi. The first attempt at these celebrations was in 1994 where most of the members had not previously participated in Phagwa celebrations or even heard a chowtal (rhythmic song in either Hindi or Bhojpuri). The leader, Bobby Manoo,

got an audio tape and lyrics for a few songs from his uncle in Penal who was the leader of the very popular Sumatie Sabha Ramayan and Chowtal Group. The chowtal practice, therefore, began with this audio tape and assistance was provided from the resident caretaker at the St. James temple.

After months of practice, the group represented the St. James Temple at the annual Chowtal Samelan competition at the headquarters of the Maha Sabha and later went on to perform at seven venues around the country during the Phagwa festival. It was the first time that a Hindu Youth group from Port of Spain participated in these celebrations and feedback from organisers and spectators were very encouraging. The group was featured in a newspaper article and television news reports and was subsequently invited to perform for the President and Mrs Hassanali at President’s House. Mr Hassanali commended the group on its achievement over a short period of time and encouraged the group to keep engaging in cultural activities.

A Phagwa celebration the year after was a much larger event for the group. At this time, the group was operating on its own and had formed a partnership with Ramdeen Chotoo who led the Aranguez Sanatan Dharma Maha Sabha Group. This partnership opened the way for both groups to practice together and allowed a rare and valuable opportunity for the young Hindus to learn from the cultural giants and also jointly participate in Phagwa celebrations across the country. The Youth Group performed before Ramdeen Chotoo and his group at the Maha Sabha Headquarters that year and the performance was exhilarating and energetic. The organisers remarked that the expression on the face of Ramdeen Chotoo after hearing the Youth Group said it all.

For the Phagwa day itself, a lot of planning was involved to raise funds for new uniforms and to organise the movement of nearly 70 people across eight venues across the country. The parents provided a lot of support in providing food, drinks, 4 barrels of abeer (coloured liquid) and of course transport, including two flatbed trucks with a banner saying ‘Phagmobile’ across the back of the trucks.

A Youth Group from Port of Spain created a stir again at almost every venue. This culminated with the group receiving prizes for best performances at 3 venues that year.

There were however a lot more other than Phagwa. The group took a leading role for the Pradakshina – The Vivekananda Run which was held in 1995 by the Hindu Prachar Kendra. This was a mass circumambulation of the entire island of Trinidad in honour of Swami Vivekananda. The POS Youth Group led the run from the point of entry into Port of Spain, overnight celebration and speeches at Woodford Square and continuation of the run into the East-West Corridor. It was another occasion where the group was featured very favourably in the newspapers.

There were always events planned on a monthly basis. Ramayan satsanghs, where the group would lead chats, bhajans and songs from the Ramayan or Bhagavad Gita. These regular events allowed the group to visit many temples across the country and meet a wide range of people. The group also collectively celebrated Divali, Shiv Ratri, Raksha Bandhan, Christmas and actively participated in programs at the Divali Nagar.

There were also a lot of occasions for fun. Everyone’s birthday was celebrated in some way or the other. There were regular visits to the shopping malls in Port of Spain and to the beaches. There was one occasion where most of the members went to see the movie Jurassic Park and took up two entire rows in the Cinema.

The group dissolved naturally around the end of 1996 as many of the members went off to tertiary education, migrated, got married and moved out of Port of Spain or moved into other projects. During the time of its existence, the group made a definite mark on not only the members but the wider national community.

Some of the friendships which have been forged in the Youth Group have continued to this day and the experiences, knowledge and learning opportunities have contributed positively in no small measure to the various life paths taken by all its members.

In November 2013, there was a reunion with the group and many got together with their respective spouses and children.

Article Written and Photos Provided by 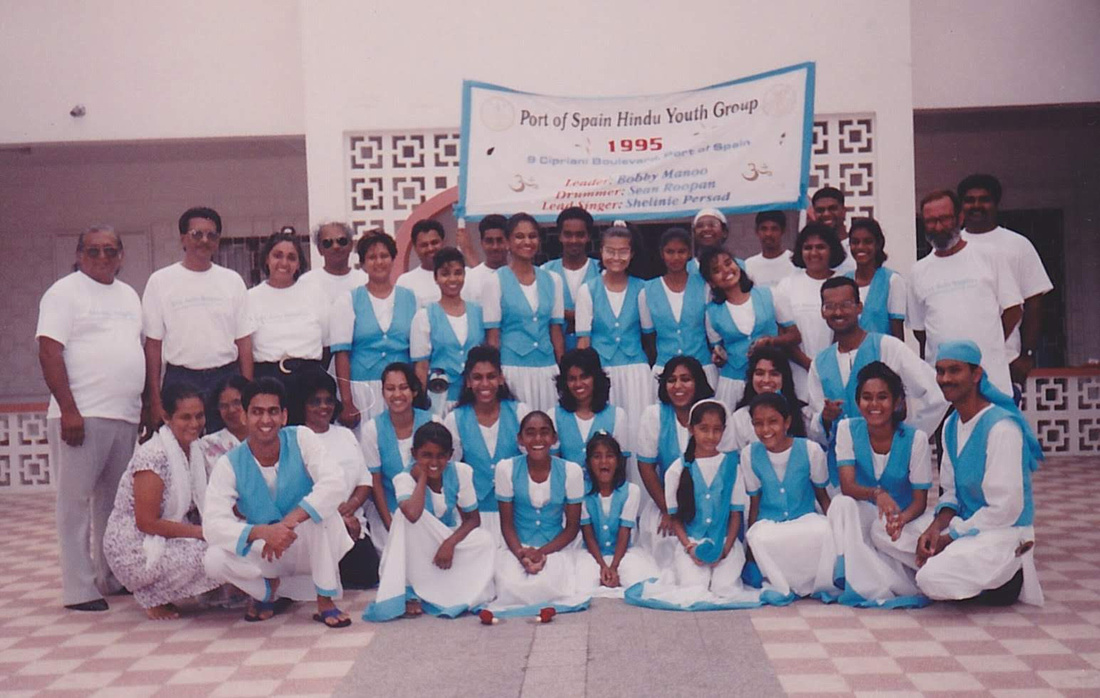 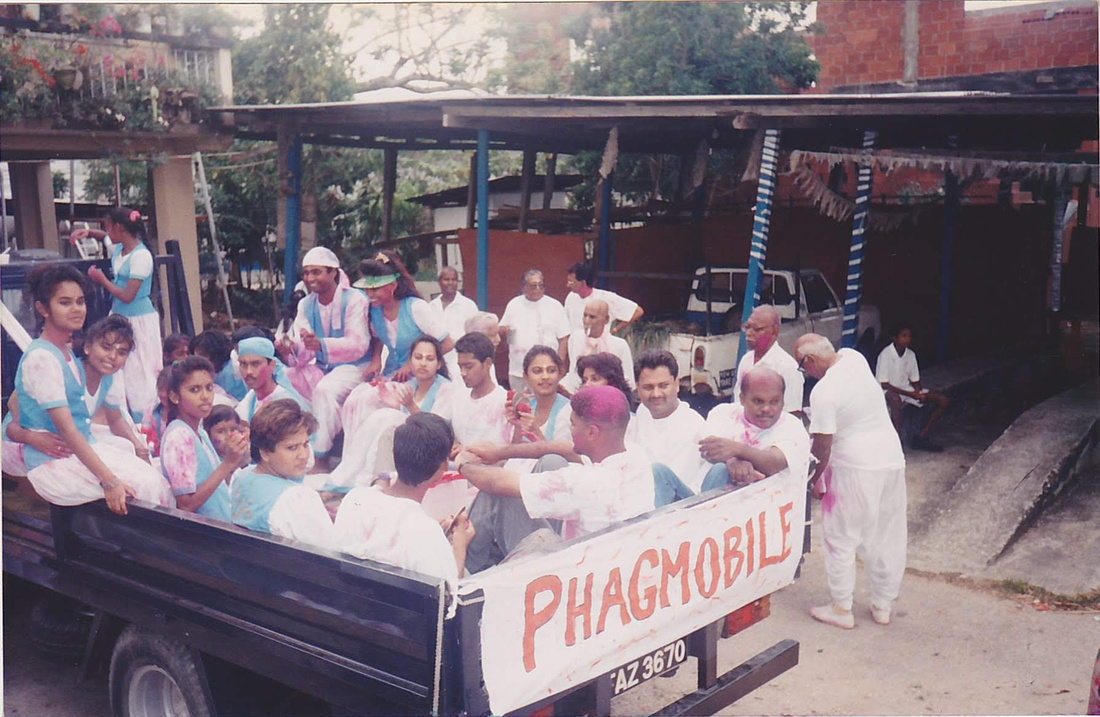 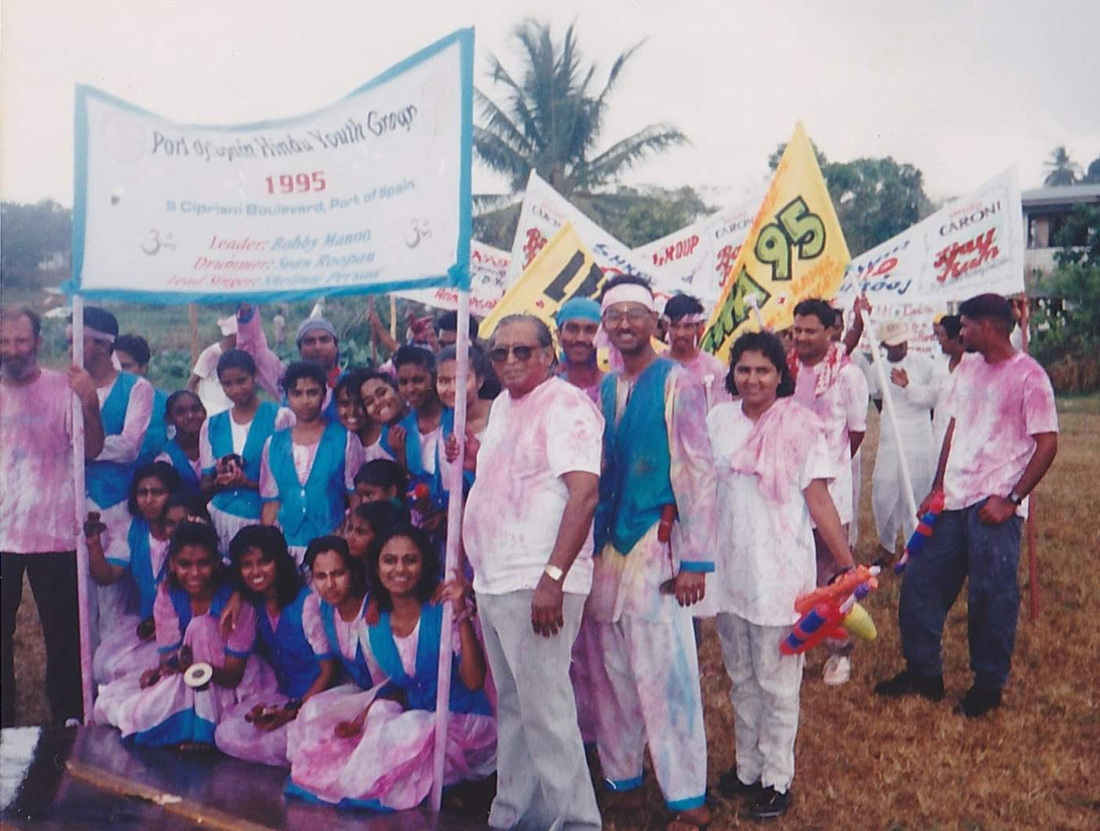 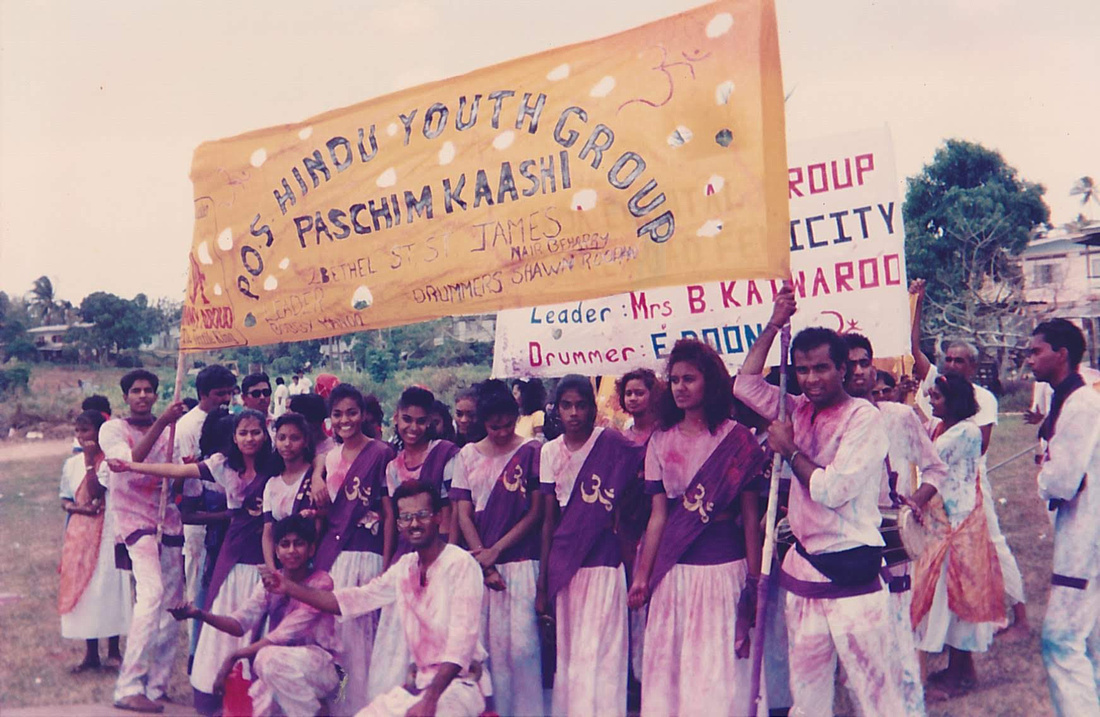 1994- Phagwa / Holi Standing in Line at Venue Waiting to Perform 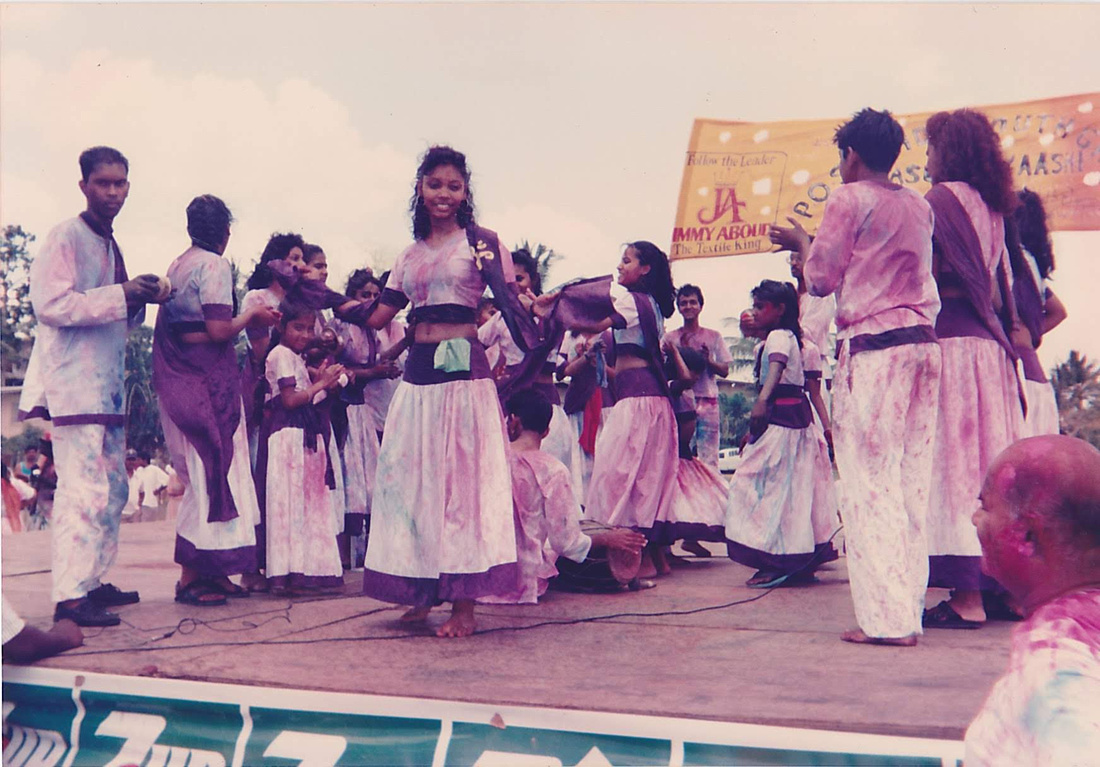 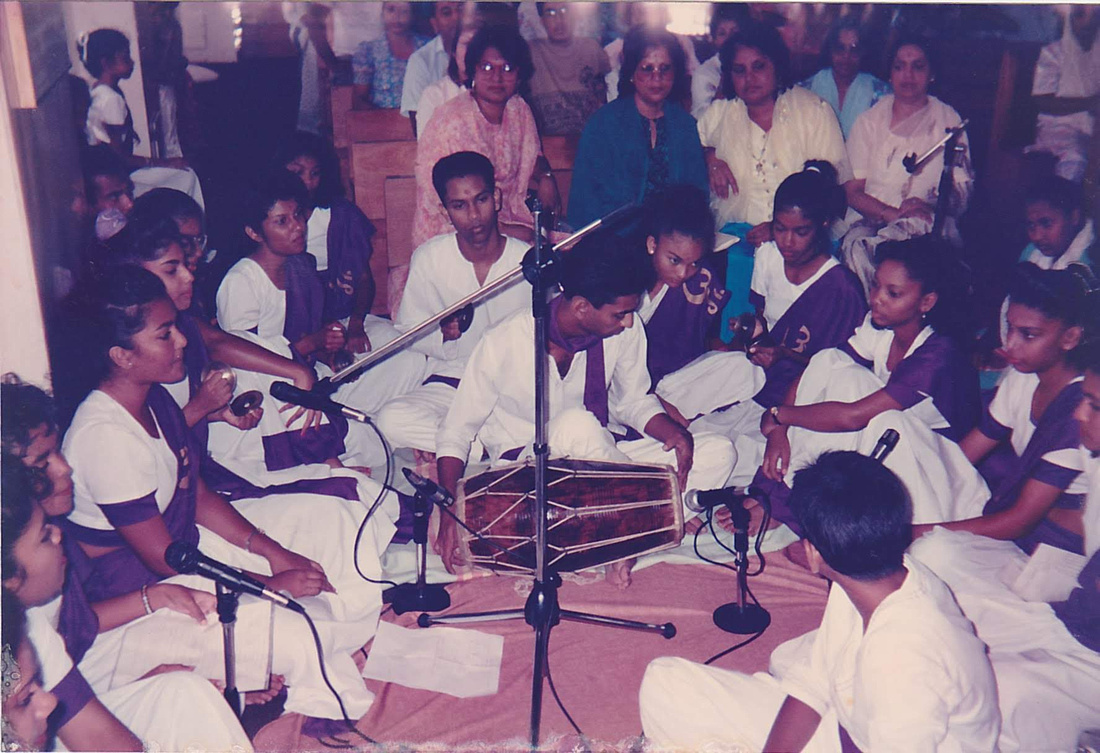 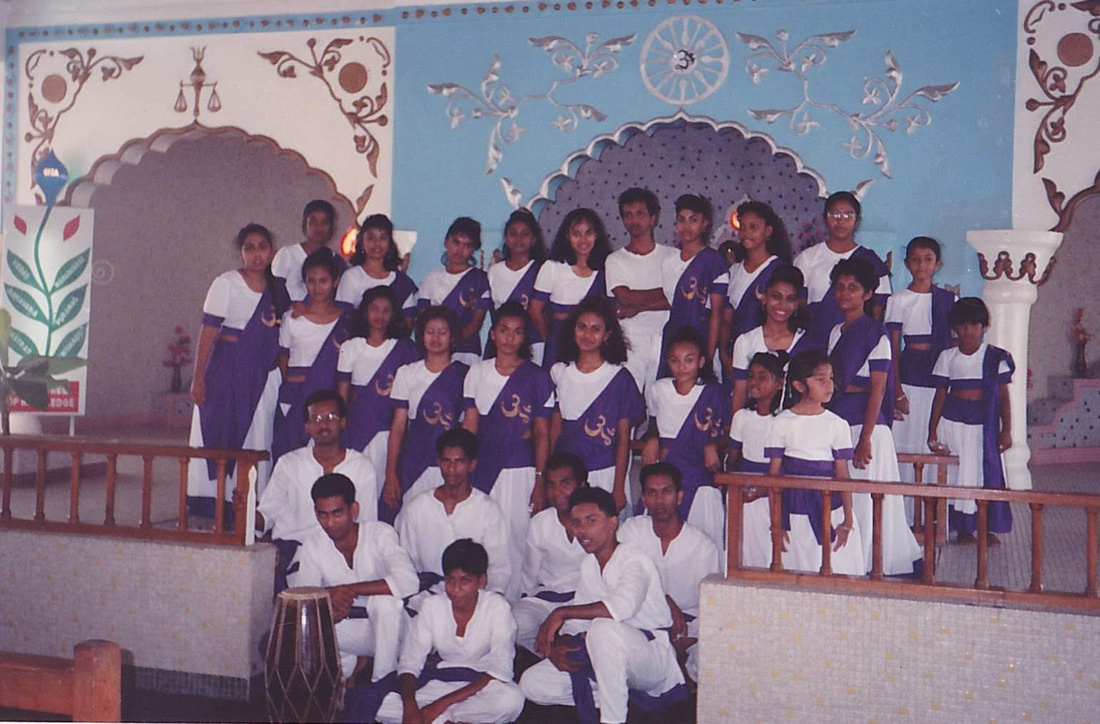 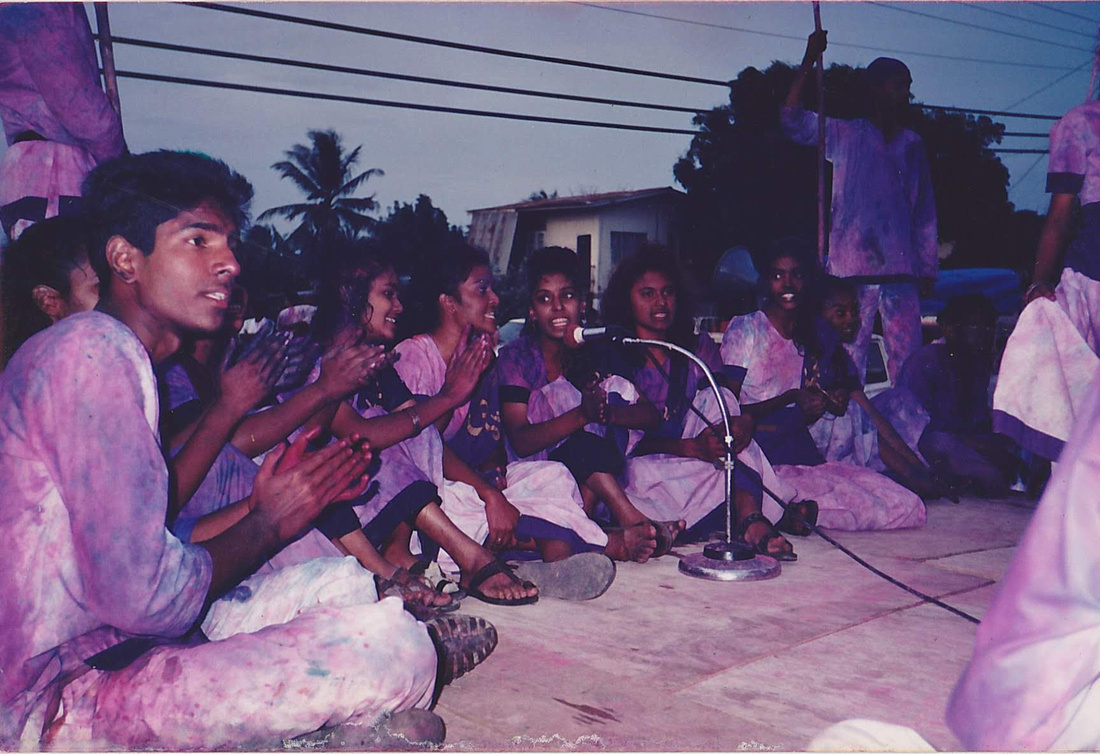 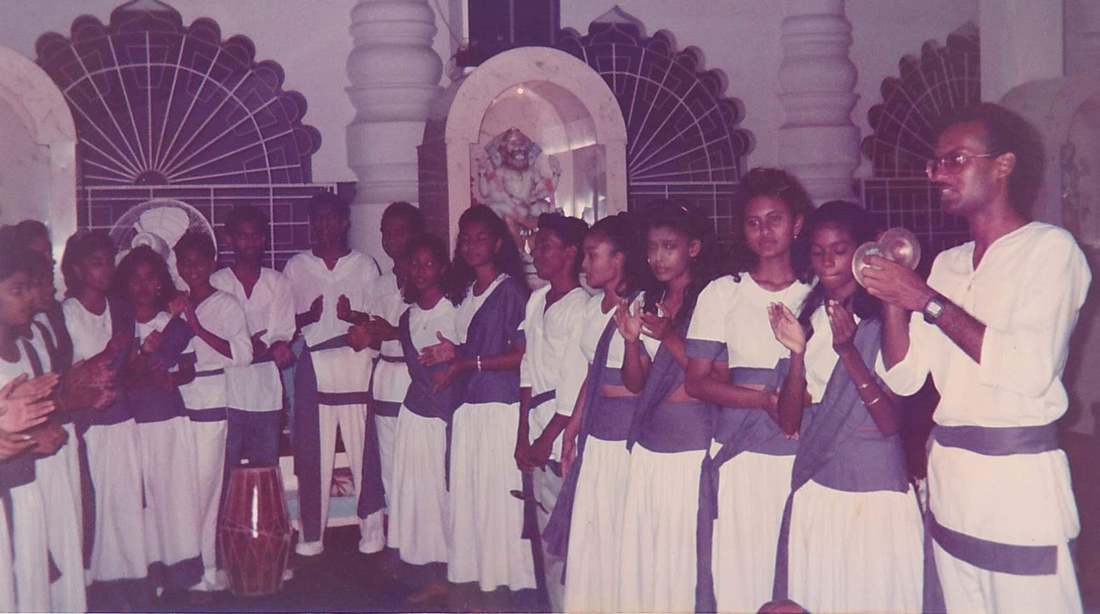 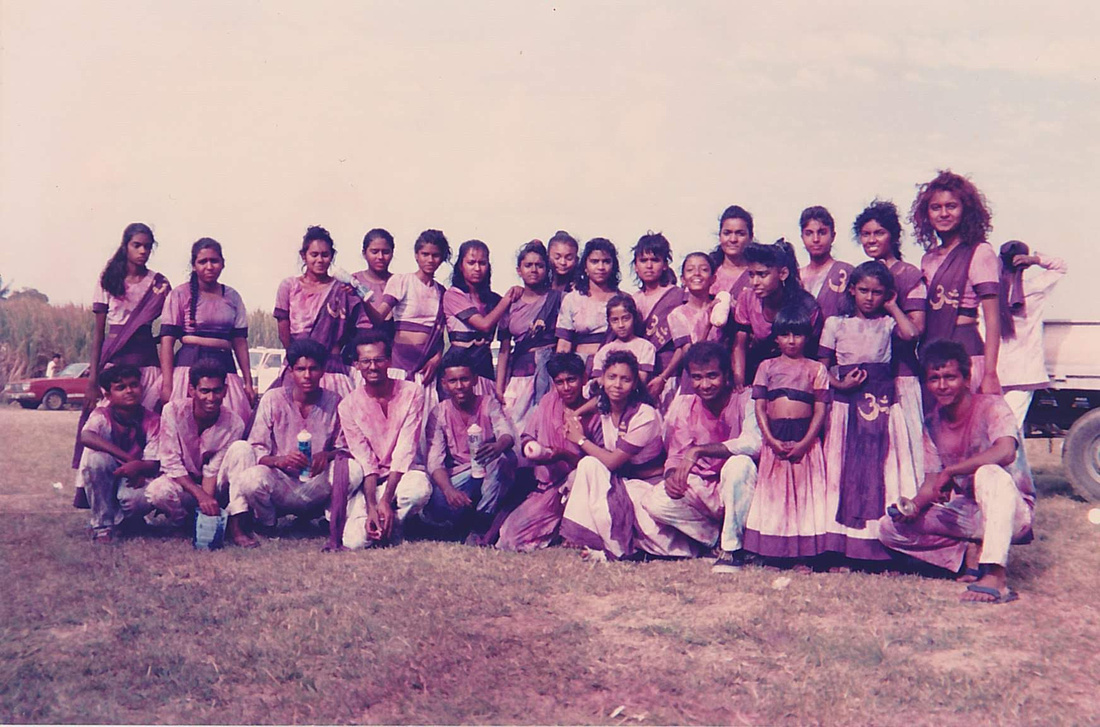 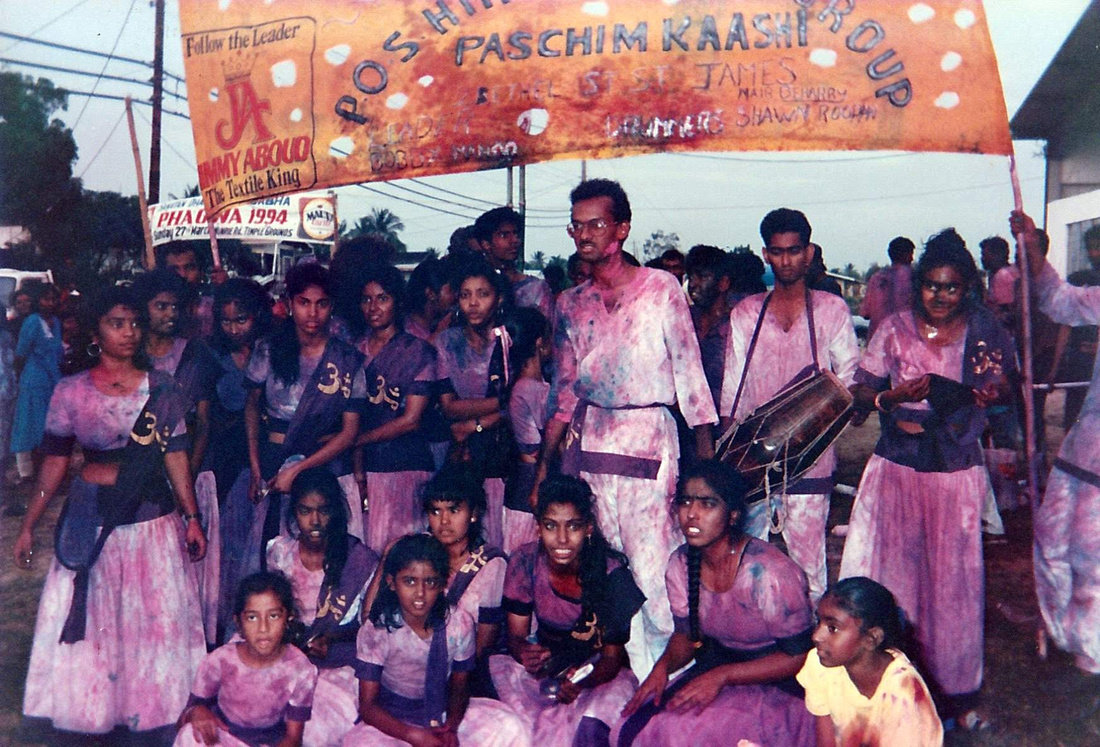 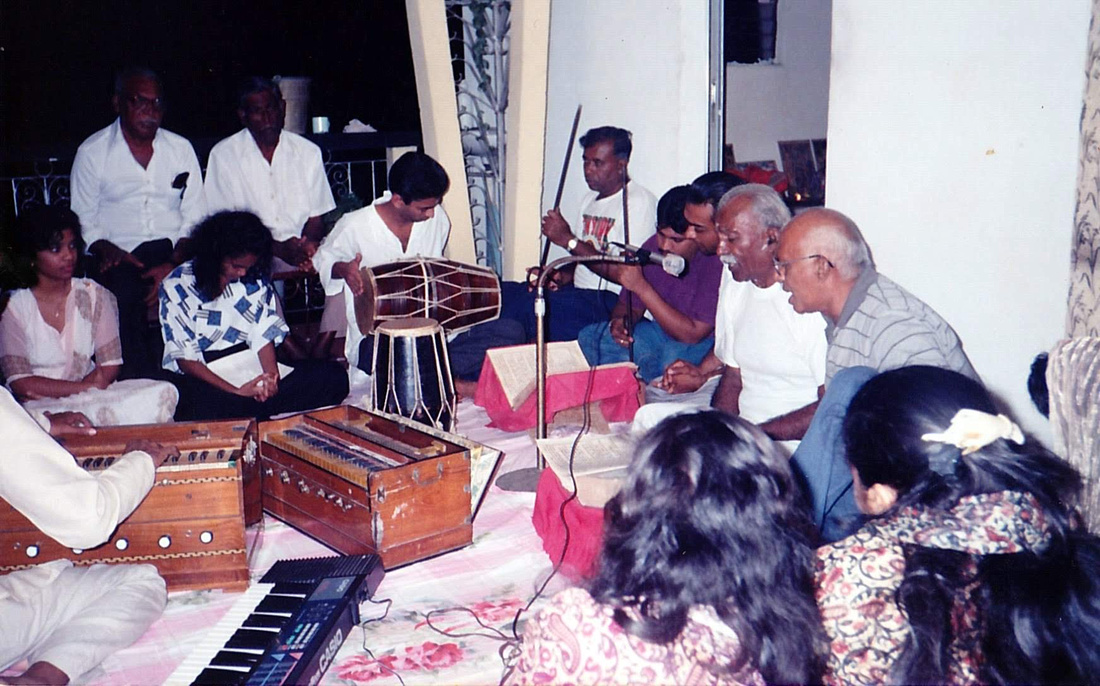 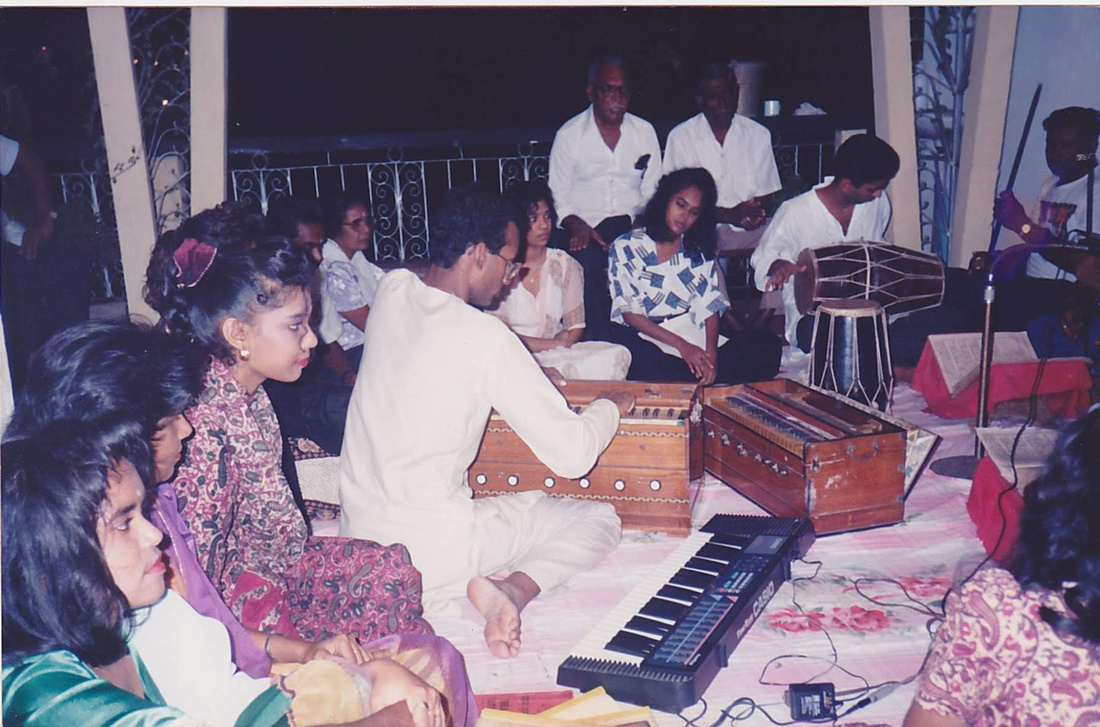 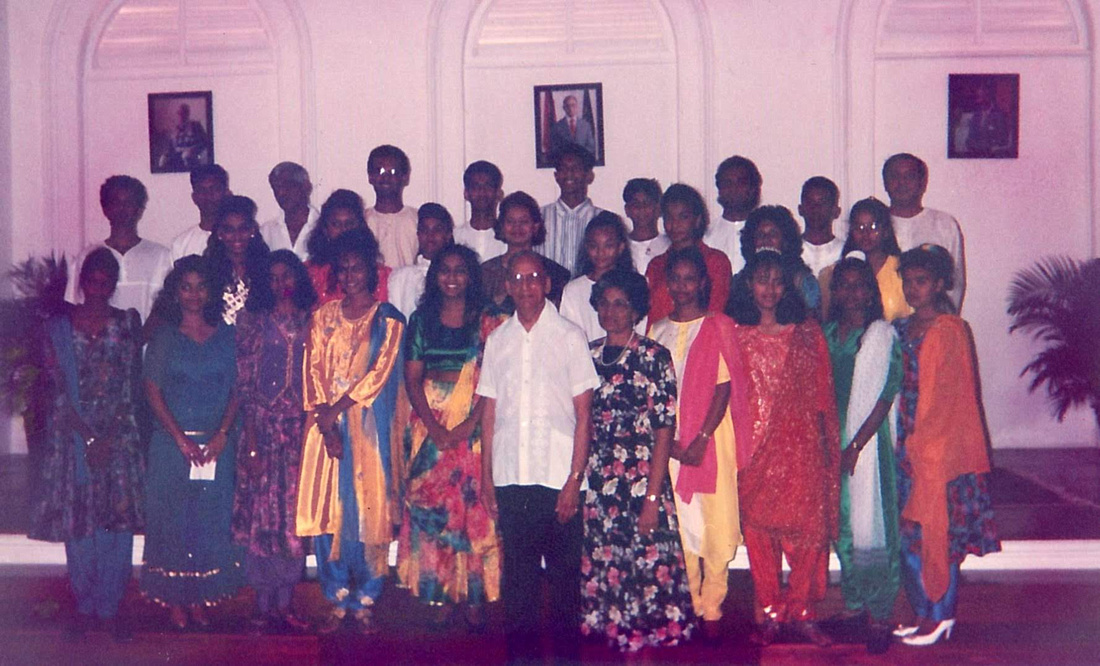 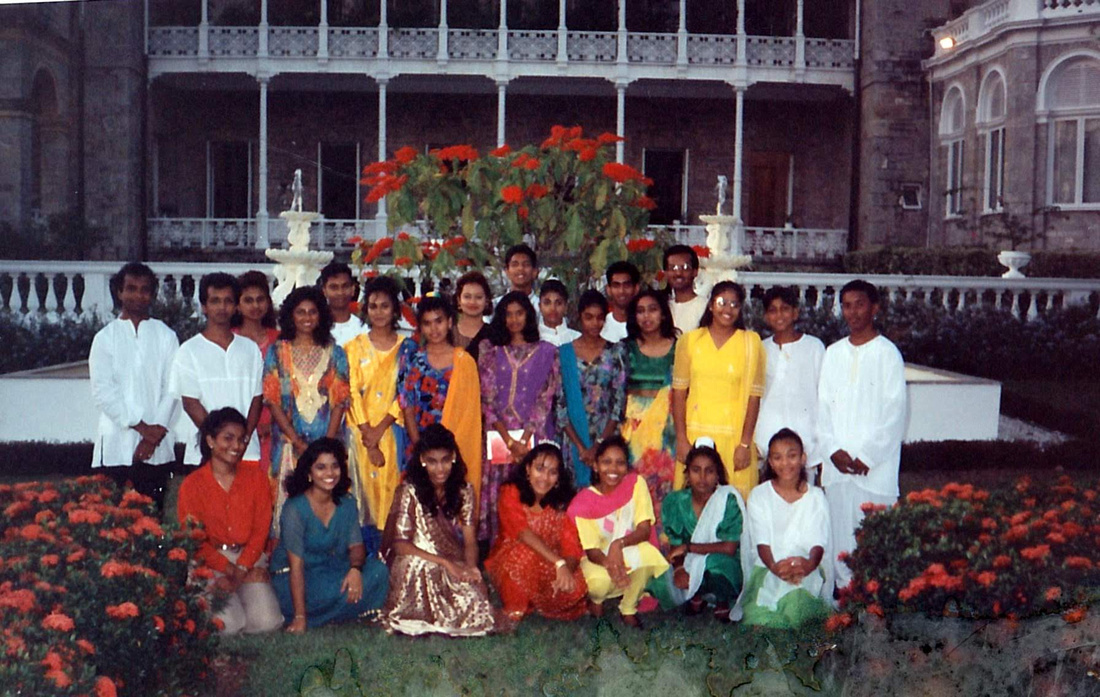 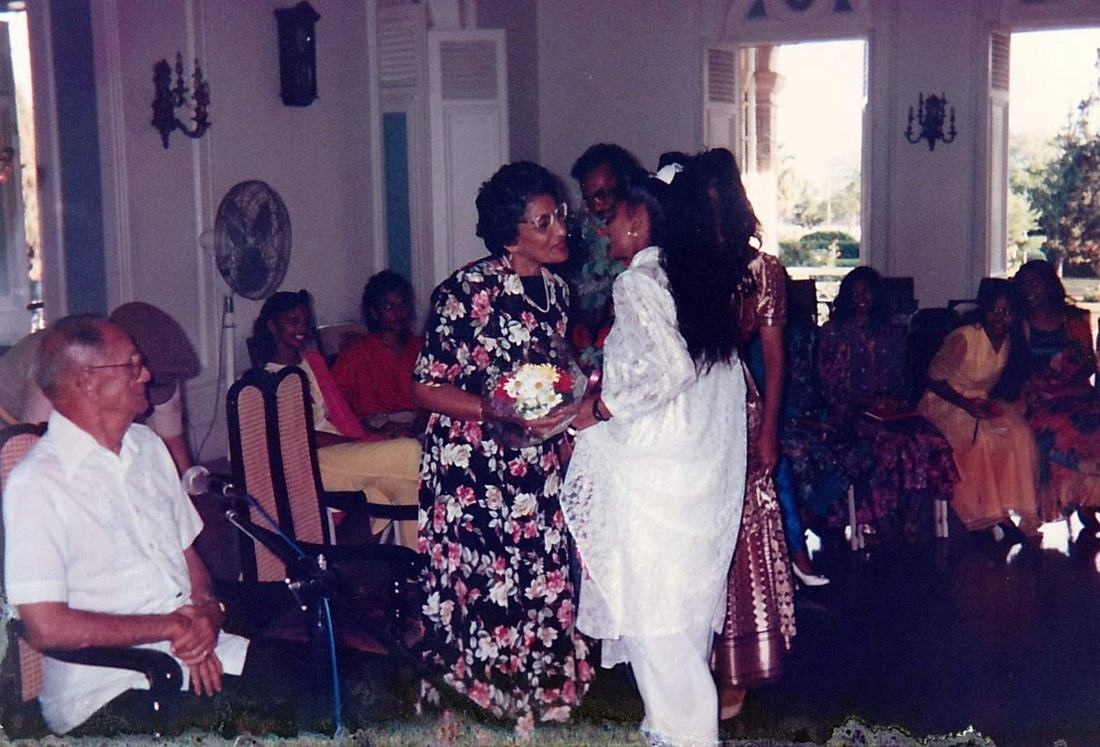